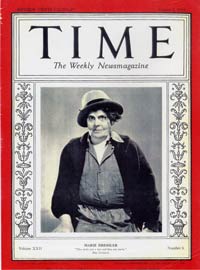 First Film Actress on the cover of Time - August 7, 1933Marie Dressler is considered one of the greatest comediennes of her generation and one of Hollywood's best loved stars. She was, at one time, the highest paid star in the movie industry, earning more than Greta Garbo or Mickey Mouse. In 1930, at sixty years of age, she won the coveted Oscar for Best Actress. In the early 1930s, Dressler was North America's top box office draw, earning $4,000 a week, and in August 1933, she was the first woman to grace the cover of Time magazine.

While these accolades tell of her phenomenal success in the movie world, they only relate to the later years of Dressler's career. A discussion of her early life, stage career, and her transition to silent and talking pictures will show that Dressler was a youngster who had a dream of being on the stage; that she dared to follow that dream, and persisted in the development of her craft, through times of success and failure. At an age when most stars are long forgotten by Hollywood producers, Dressler reached the pinnacle of her career. Dressler's life story is worth recounting, not only for her triumphs, but also for her determination to be successful in show business, and for the immeasurable persistence she demonstrated in following her dream to its fulfilment. Congratulations, Marie, you had the fortitude to be a winner!