This year, the Marie Dressler Foundation today handed out four bursaries at $1500 each to four students from Northumberland High Schools - this year three from Cobourg and a sturdent from Warkworth who attended Northumberland East High School in Brighton. Each winner is a student graduating from Grade 12 in 2016 and intends to pursue a further education in this field.

Here are brief resumes of the winners.

Christian Hodge graduates from East Northumberland Secondary School with outstanding academic achievement. He has won  the admiration and respect of his teachers and community leaders who recognise  his talent as a pianist, composer,  playwright, stagehand, director and for participation in music and theatrical festivals, including his school,  Kiwanis, Stirling, Westben .and Northumberland Players.   Christian’s volunteerism is celebrated by the citizenry of downtown Warkworth to the provincial officials of downtown Toronto. How could anyone have used his high school years more actively to hone his skills for a career in theatre?

If volunteering and down-right hard work bring success, then Amy Scott should enjoy a bright future in the world of Media and Theatre . Amy has found opportunities to learn skills in movement/blocking , stage combat, and script reading by teaching young children at Northumberland Players Camp. She has performed challenging roles in Players productions and volunteered to assist the stage manager, as well. By volunteering Amy learned how to use the sound board for dinner theatre and assisting with lighting for a public performance. In grade ten Amy challenged  herself to direct ARSENIC AND OLD LACE, a school production and earned the respect of her teacher and actors. In 2015 Amy  was awarded the Town of Cobourg Civic Award for ARTS. One can believe that Amy will take advantage of every opportunity at Western University to further develop her skills for Media Production.

David graduates from Cobourg District Institute with outstanding academic credits in Mathematics, Science, English,  Media Studies and Writing. He received the Writer’s Craft Prize for producing challenging and provocative works and demonstrating his enthusiasm for screenwriting. David shares his ideas and opinions in a way which acts as a catalyst to class discussions and demonstrates that he earns the respect of his classmates, and his work habits lead to better his own learning and those around him. David played the Cowardly Lion in THE WIZARD OF OZ and ventured to take improv trainng at the Second City, Toronto. With such exemplary distinction David should do well at York University in his Bachelor of Fine Arts in Film Production.

Carlie’s  early decision to focus on the film industry has directed her consistent choice of courses and community artistic experiences. She demonstrated that she could easily learn  lighting and sound techniques at school and in Northumberland Players productions and at a Kawartha Pine Ridge Theatre  Camp working as a counselor. Carlie played leading roles in Northumberland Players ALADDIN , HANSEL AND GRETEL  and SNOW WHITE. She was elected to Student Council and served on the Social Justice club. Graduating on the Honour  Role with  above average marks in English, Communication Technology , and Visual Arts –Film/Video, Carlie should be well prepared for success in her course of Film and Media Production at Humber College.

Presentations were made at Marie Dressler House at 10:00am on July 9th. David Robert was not able to be present (he has to work at Camp Kawartha) but was represented by his proud mother, Claudia Curry. 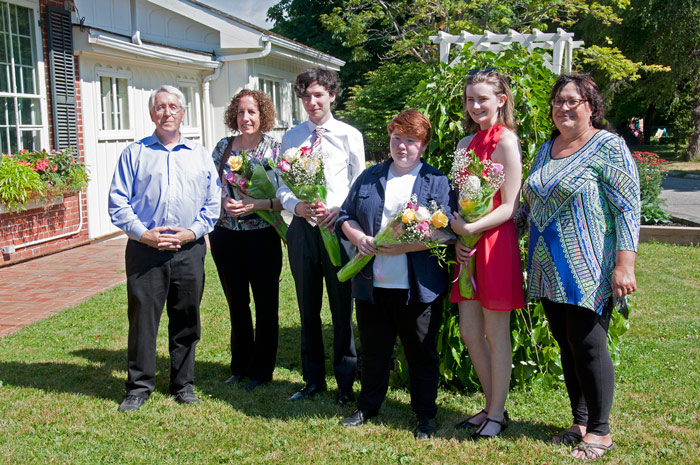