The Board of Directors of Marie Dressler Foundation is excited to announce the opening of Canada's newest heritage museum.

The new Marie Dressler Museum highlights the achievements of the Cobourg-born star of stage and screen, winner of the 1931 Academy Award for Best Actress at age 63, top grossing actor in Hollywood in both 1932 and 1933 and the best loved comedienne of her time.

The Town of Cobourg has proclaimed September 24th to be "Marie Dressler Celebration Day". The official opening of the museum will be a public event held at 1:00 p.m. at Marie Dressler House, 212 King Street West, Cobourg.

"When Marie met King Edward VII while performing in London, she informed him that she was born in Cobourg, Canada, the place where he, as a young Prince of Wales, had opened Victoria Hall in 1860", added Miller. 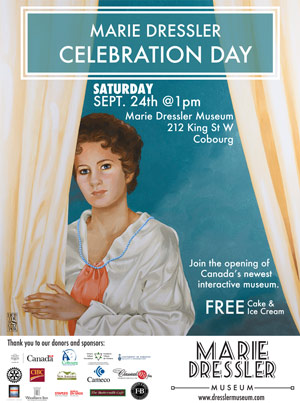 The museum, themed with 1930's Hollywood art deco, utilizes the Foundation's extensive archive of photographs, films, and other artifacts. The storytelling is enhanced with state-of-the-art interactive features, including a Hollywood art deco mirror and dressing table.

The project began in 2014 with the design of the museum by a team of five women in the Master's Program in Museum Studies at University of Toronto's Faculty of Information. The completed research and detailed design was donated by University of Toronto to the Foundation in April 2015. Following a year of fundraising, the Foundation hired one of the original team members as Exhibition Project Manager. Work commenced in April 2016 to create the museum.

"The continuing relationship with University of Toronto is very special", added Miller. "We are grateful that this world-class institution invested in our small community and continues to give us guidance along the way."

The Honorable Mélanie Joly, Minister of Canadian Heritage, has recognized the commitment of the Foundation to this heritage project and the work of the individuals, donors, sponsors, and suppliers.
"The 150th anniversary of Confederation is a time to celebrate Canadians and their achievements," said Northumberland –Peterborough South MP Kim Rudd. "I am pleased that through the Canada 150 Infrastructure program our government is able to support the Marie Dressler Foundation and preserve the legacy of this beloved pioneer of the silver screen."

Funding for this project has been provided by the Federal Ecomomic Development Agency for Southern Ontario (FedDev Ontario) through the Canada 150 Infrastructure Program, Ontario Trillium Foundation, Town of Cobourg, University of Toronto, along with major donations from Cameco Corp., and Rotary Club of Cobourg. These investments have been augmented by the generous donations and sponsorships from businesses and individuals in the community and local suppliers.

Following the official ceremony, free cake, ice-cream, popsicles, and refreshments will be served.

Northumberland 89.7FM will be hosting a live on-air program during the event, featuring 1920's and 1930's music.